Love when food trends follow fashion trends.  How adorable is this chevron pattern on a traditional jelly roll.  I credit Pinterest with popularizing food that is so darn cute in the everyday households.  It’s fun to watch all the adorable treats popping up on social media.  And wouldn’t this be great on an Easter brunch table? 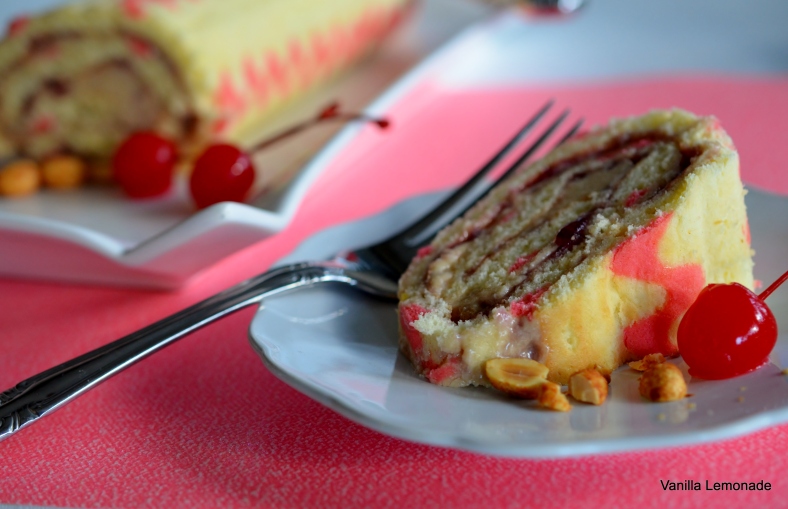 I loved the idea of honoring the 1850s jelly roll then with classic flavors of peanut butter and jelly. 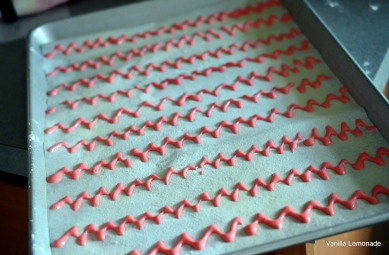 In a medium mixing bowl, whip the eggs until frothy. Slowly add sugar, water, vanilla and flour mixture, scraping bowl occasionally.  Take out about 1/4 of the batter and add a few drops of food color to get to the desired color.

Place the colored batter into a piping bag with a small flat tip and make the zig zag pattern onto the wax paper.  You can find patterns on line to print out and trace, or make your own with a sharpie marker on a piece of parchment paper placed under the wax paper.

Bake the patterned batter for 2 minutes; allow cooling for 3 minutes and then spreading the rest of the batter on top.  Bake another 9-11 minutes.

Immediately loosen the cake around the edges and invert cake onto prepared towel. Carefully remove paper. Roll the cake, beginning at the narrow end. Cool on a wire rack for 45 minutes. 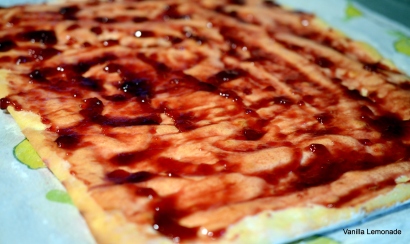 Gently roll the cake and wrap in plastic wrap; refrigerate at least 3 hours before serving.  Slice and serve with fresh fruit or berries.

This is such a fun, playful way to present a jelly roll cake.   The peanut butter and jelly filling is going to take you back to the lunchroom table, where everything is cute as a polka dot and sweet as a sprinkle!

Let your inner child and fashionista meet in the kitchen!

This is what I used https://appliancereviewer.co.uk/best-ovens/

My friend Jenny brought in her hometown favorite last year to a work pot luck, St. Louis Gooey Butter Cake. It was only one small bite that I took, which was all I needed to know that I would add this to my “must make list”.  I had no idea what it was; I didn’t recognize it as anything I have tried before, just rich, buttery, and gooey goodness.  When Gooey Butter Cake made it to the top of my must make list, I spent some time looking for a recipe, recalling Jenny telling me she uses Paula Deen’s version. I found the one, but ran upon Paula Deen’s Pumpkin Gooey Cake and could not resist trying this version.  I just wanted to make a small tweek…

Pumpkin desserts need graham crusts.  Some pies, cakes, bars just do not reach their potential without graham bottoms.  I shun any key lime pie made with a plain butter crust, same is true for pumpkin and sweet potato.  So I knew right away that I needed to modify the great Paula Deen’s recipe to make it better, how could she not know this?

Here’s what I did-

Preheat the oven to 350.  Add all the ingredients to a food processors and pulse until well combined.  You may need to do in two batches depending on the size of your processor.  If you are without a food processor try crumbling the crackers by putting them into a large Ziploc bag and then use a rolling pin to crush them.

Press the crumbs into the springform pan and bake for 10 minutes.

To make the filling:

In a large bowl, beat the cream cheese and pumpkin until smooth. Add the eggs, vanilla, and butter, and beat together. Next, add the powdered sugar, cinnamon, nutmeg, and mix well. Spread pumpkin mixture over graham crust and bake for 75 minutes until the center has a soft jiggle and a pick comes out clean. 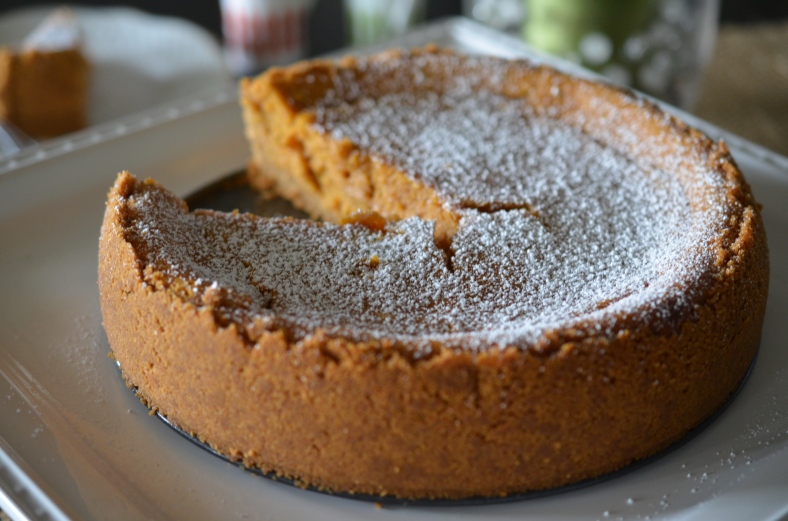 When I took it out of the oven, I couldn’t help but think this is not right; it looked just like cheesecake.  Crap.  This is not what I was hoping for.  All this time thinking about that bite of Jenny’s Gooey Butter Cake and this is what I get- cheesecake.  I cursed myself, first for using the pumpkin version instead of the traditional Paula Deen recipe, and then for changing it, thinking I knew better as if I was professional baker.  Crap.

Wes came in from working in the yard and smelled the house, proclaimed it smelled like heaven.  I gave him a quick sigh of frustration and told him how stupid this cake was, that I was pissed. (Excuse my language, but I was super mad).  He didn’t really seem to connect with my frustration; all he saw was a perfect looking and smelling cake sitting on the counter.

When the cake had cooled completely I sliced into it, and saw that I was right, it had a cheesecake consistency.  This was not Gooey Butter Cake.  But I plated up the slice and took my photographs, just in case it came out tasty.  When I was done shooting, I took the bite off the fork and smiled with relief.  Deliciousness.

The cake certainly was not what I planned for, Pumpkin Gooey Butter Cake, but was one of the best pumpkin cheesecakes I’ve had.  Rich but not heavy and the pumpkin flavor was sweet but not like candy.  There was stronger pumpkin taste then in typical cheesecakes which I love.

I took a chance in the kitchen, which is not unusual for me to do, but I don’t typically mess around with baking recipes.  In this case I was lucky; my chance had a happy ending.  Jenny’s Gooey Butter Cake is still on my must make list, and this Pumpkin Gooey Cheesecake is now on the repeat list!

Little Bit About Me

Top Ranked Day Dreamer, Disney Parks Catering, Chef, Creative Developer, Amateur Photographer. I am a wife, a daughter, a sister, a step-mother, an aunt too! We live in Florida and am lucky enough to work at the most magical place on earth!